The Champion’s Dinner in Augusta is one of golf’s great traditions. The reigning champ selects the menu and dines with one of the game’s most exclusive fraternities. Over the years, we’ve seen everything from elegant five-course meals to cheeseburgers and milkshakes (shout out to Tiger, who brought in burgers and fries after his 1997 win).

This year’s defending champ, Dustin Johnson, will serve up a stellar menu complete with some of his favorite dishes, including a Miso Sea Bass that he was first introduced to him by his personal chef, Michael Parks. The rest of his menu includes:

Now that we know what Dustin is having for dinner tonight, we couldn’t help but wonder about the rest of the year? TaylorMade recently caught up with Chef Parks, to chat about the World No. 1’s favorite meals, nutritional practices and the importance of eating right to perform your best. Parks even shared the full recipe for his Miso Sea Bass, which inspired Johnson’s champion’s dinner selection.

Have fun trying that recipe at home! For DJ, it’s one of his favorites when he’s out on the road. Parks travels with him week after week out on Tour, preparing meals and ensuring DJ is fueled for peak performance. It’s a blend of both art and science. He requires Johnson to take nutritional tests once every three months to better understand his dietary needs.

“When it comes to diets and nutrition, one thing that’s overlooked is that when you eat a lot of any certain food, you can develop a sensitivity to it. You can start having trouble with digestion, which can lead to inflammation, joint aches and all kinds of physical manifestations," says Parks, who oversees a team of 15 chefs that work with athletes across golf, football and running. "So, when we do our sensitivity tests, we’re really designing our meals to match the exact needs of his body at that time.”

The most challenging thing, according to Parks, is convincing athletes they need to cut things out of their daily eating habits. Then at the end of three months, convincing them to again change their diet. It takes discipline, but DJ fully committed to this strategy starting late in 2020, and the results showed on course. He’s said he never felt better physically, has no aches and his recovery time has improved.

They’ve almost completely removed chicken and eggs from his diet at this stage. For years, he religiously had the same omelet for breakfast. It’s now been replaced with gluten-free oatmeal pancakes (which DJ’s kids love), a sweet potato scramble, lean breakfast sausage and a vegetable side. That’s followed up by a protein shake made with avocado and spinach.

Sandwiches are a lunchtime favorite for the World No. 1 (you may remember his comments headed to Augusta last year). It’s also well documented that his go to on-course snack is an almond butter and jelly sandwich. But, if Parks has his way, the bread would be replaced by a gluten-free wrap. That’s why he commonly serves up a Turkey Burger wrap made with fresh vegetables and a zesty sauce. 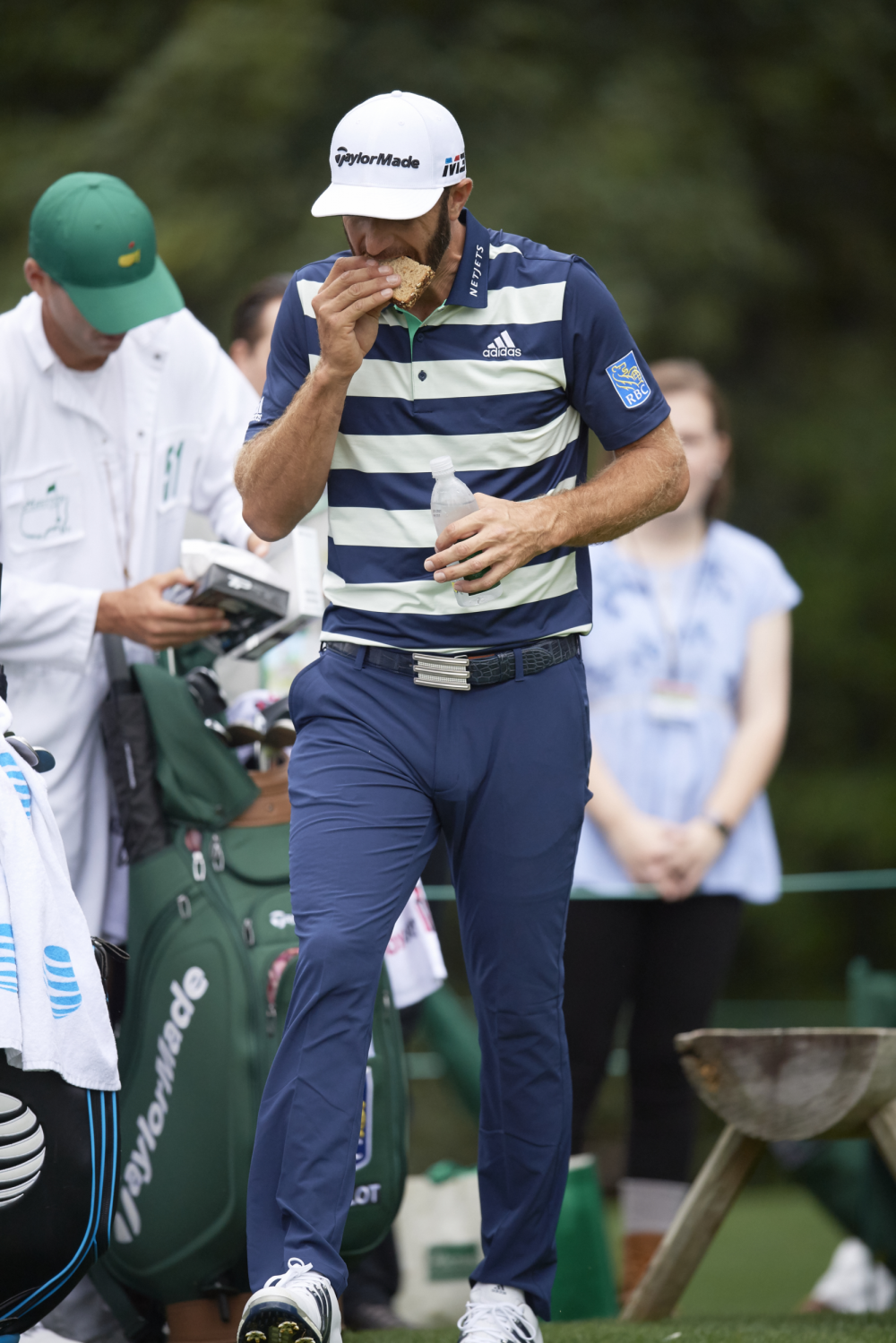 Of late, dinner has been a heavy helping of fish and beef. Some of DJ’s favorites are then aforementioned Miso Sea Bass, Jerk Snapper and Filet Mignon. They’ll do pasta with Turkey Meatballs to carb load for sustained energy levels while burning the extra calories for warm-weather events. Other staples include shrimp and a healthy meatloaf made from ultra-lean beef that’s chock-full of diced vegetables and a low-sodium seasoning.

“We try to schedule 4-5 meals a day to keep his metabolism up when he’s burning so much energy out there,” says Parks, who’s traveled with DJ for the last three years. “It’s been a crazy ride, winning in Augusta, the FedEx Cup and getting to World No. 1. It’s been fun to be part of the team.”

Parks is a prized chef who’s studied at the famed Le Cordon Bleu. So, when he first began working with DJ, he meticulously plated each dish for an exquisite presentation. After a short while, DJ said to him: “You don’t have to do that. We’re country boys; throw it on a plate and let’s eat.”

Whether it’s cuisine or the course, DJ’s mentality doesn’t change much.